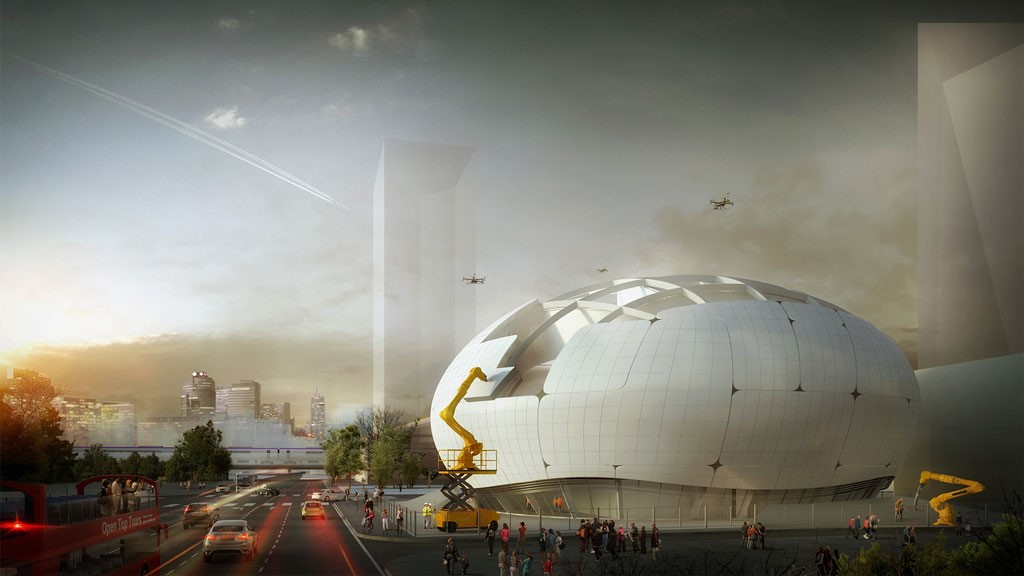 If you’re anywhere near Seoul next year don’t miss the first exhibition at the new Robot Science Museum because it will feature the new facility’s own construction, using robotic construction methods, while drones hover about helping direct operations.

Melike Altinisik Architects, the Istanbul design firm that won the Seoul government-sponsored design competition for the museum also proposed the method of robotic construction. MAA’s winning design takes the form of an elliptical shape covered in panels that will be fixed in place by robotic arms.

In announcing her firm’s win, Melike Altinisik got slightly carried away with the prospects of a machine-driven future.  “From design, manufacturing to construction and services robots will be in charge” she lyricised. This seems to be more evidence of hyperbole than holograms; we can be sure that the Turkish design team will still have the handlebars when construction gets underway in 2020. What is clear is that all aspects of the museum have been shaped by principles of robotics, science, technology, and innovation, from form and structure to materials and operation. If successful it will provide an exciting example of what robotic technology can deliver. According to MAA the museum will “create its own universe for robots and their visitors,” beginning with a non-directional, fluid, spherical structure. It is hoped that the structure’s organic form will create opportunities for visitor experience as well as meeting the needs for comfort, movement through the building and other functional requirements.

Public education and engagement with science, technology and innovation lies at the centre of the museum’s mission. The new facility will allow visitors to experience robotic technologies, from artificial intelligence, virtual and augmented reality to holograms. Programmes will include a robotics course. MAA has interpreted its role as the creation of  an architectural language to communicate cutting-edge fabrication technologies, and robotic construction methodologies. Robots will assemble the museum’s curved metal façade, directed by building information modelling (BIM) systems to mold, assemble, weld, and polish the metal plates.

Meanwhile, another team of robots will use 3D printing to create the concrete elements for the surrounding landscape. This semi-automated construction process creates continuity within the museum between robots used for construction, robots to provide services, and robots for exhibition. Its also expected to achieve the pragmatic but highly desirable virtues of saving time and money. When completed in 2022, the museum will be located next to a Photographic Art Museum, forming part of an economic and cultural cluster being created in northern Seoul.

MAA’s plan for construction of the Robot Science Museum is just one example of the considerable potential that robotic technologies hold for architecture. This year’s Chicago Architecture Biennial saw Skidmore Owings and Merrill erect a stereoform slab using robotic fabrication, while a Shanghai conference centre was built in just 100 days using robotic-assisted construction. Concrete printing has been trialed for uses that range from military barracks to future bases on Mars. A group of Danish architects has gone so far to suggest that autonomous 3D printers could roam the globe to repair environments while drones conduct micro repairs on buildings and structures.