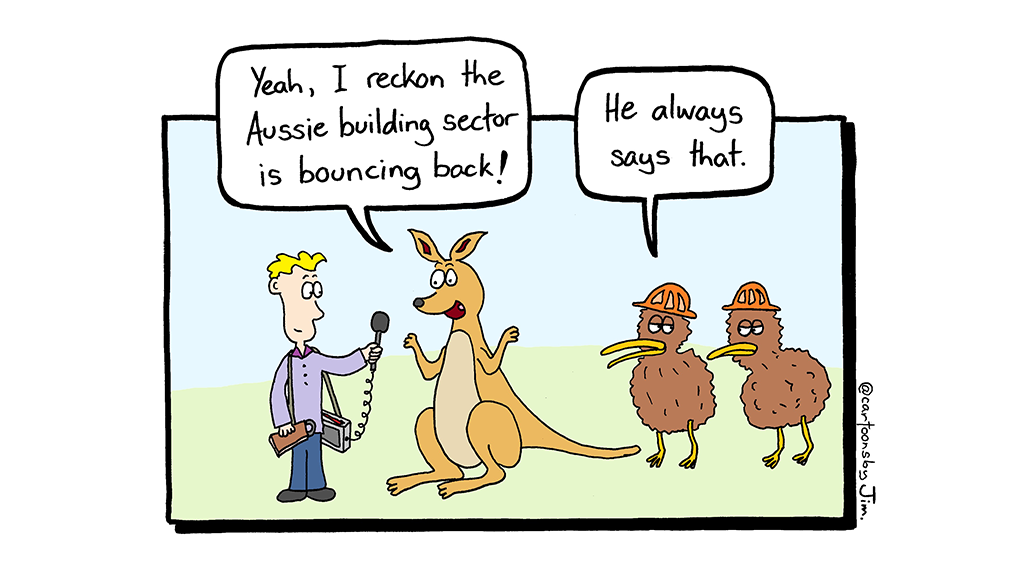 At both ends of the scale, the Australian building and construction sector is showing signs of a bounce back for 2020 and beyond – so says Shane Garrett, Chief Economist for Master Builders Australia.

With first home buyers entering the domestic market in droves and increased Government infrastructure spending planned, the landscape is more positive than in recent years.

“Looking ahead to construction activity across Australia over the five year period up to the 2024/25 financial year, the picture really is quite diverse depending on what segment of construction you look at,” says Garratt.

“For example, commercial building here is doing very well at the moment, but we expect that to cool down a bit for the next couple of years.

“But in contrast, infrastructure has received a lot of support from Government in terms of roads and rail and we anticipate that transport infrastructure projects will be a big part of the action here over the next five years.

We also expect that residential housing will make something of a robust comeback. We see residential building activity probably bottoming out over the next 12 months or so, and start to lead a fairly decent recovery out to 2024/25.

In other words, and so if you add all those three bits together; If you add the residential buildings, the commercial buildings and engineering construction activity together for Australia, we think the total amount of activity will be roughly comparable with what it has been over the last five years – which was a reasonably decent period for our construction here.

"The good news is that first-home-buyer activity has stepped up even further since the start of this year. The new deposit scheme is already a big success, and the official data will show more big gains for first-home buyer once they are released."

First-home buyers comprised one in three loans issued to owner-occupiers during the month of December. The volume of home loans to First Home Buyers increased by 6.2% in seasonally-adjusted terms to record a monthly total of 9,606. The last time a higher monthly total was recorded was exactly ten years ago back in December 2009. Of the loans granted to their segment, 5.4% were for investment properties. “The amount of infrastructure activity here is still quite weak by historic standards. In fact, the engineering construction activity as a whole fell to its lowest level in a decade. That's why these new projects have been announced.

“The speed with which they're actually kicking into action on the ground has been hampered partly due to regulation and red tape getting in the way of allowing the work to actually start.”

“A very big consideration for our members is the burden of red tape, the burden of regulation and just the general burden of bureaucracy. The three layer government model that we have in Australia certainly has been the source of a lot of regulatory imposts upon businesses.

“It's important to remember that the construction industry in Australia is very much built on small businesses. About 98% of firms active in construction currently employ fewer than 20 people and a great many of the businesses in construction are in fact just one or two person operations that subcontract labour as required when doing the work.

“So the burden of regulation certainly slows work down, and the model of the industry here is one that is less well suited to actually managing new regulations as they come through.

“The Federal Government here has recently initiated what's called the Deregulation Taskforce and one of the areas they are looking at is the burden on firms in the building industry. Time will tell whether this makes meaningful changes for the sector.”

Playing Ball with the Banks

The response of the banks to the findings of the Royal Commission produced a very cautious approach to lending money and thus it impacted negatively on building and construction activity.

However, we do appear to be climbing back into more positive territories when it comes to lending. Since the middle of last year, housing investor lending - a crucial part of the home lending market - started to recover reaching the highest level in 12 months. It's still nowhere near where it was before the Royal Commission kicked off, but it is encouraging to see that there's confidence amongst that segment of the market again.

Probably the biggest supply side issue now and in the future, will be land.  It’s all about having the land in the right places, and it takes a long time to develop land in a way that's suitable for new building activity and that is always the trickiest part of the process. Again, it's an issue that's very hampered by issues like red tape and bureaucracy.

Land supply is certainly a challenge when it comes to delivering the supply of new housing in particular and also all the commercial building work which is tied to housing and the related infrastructure there.

There were a few high-profile defects identified in high rise buildings in Australia in the middle of 2019 which received considerable publicity in the media at the time. That did inflict some damage on the willingness of some people to enter into contracts around high rise, high density housing, a part of the market that had already been stuck in a downturn.

One of the impacts of that was around the availability of insurance for the builders building new projects - insurance was either made unavailable or else the premium increased overnight by huge rates, tripling, and even quadrupling and that's another hot topic that has popped up in the last 12 months.

The Shergold Weir report was a crucial landmark report on building quality in Australia. We’ve been calling for those recommendations to be implemented in full as soon as possible so that confidence in the newly built homes and newly built commercial buildings across Australia can be restored and buyers can buy with a lot more confidence than has been the case last year. In terms of supply of labour, there will be issues there as well. Certain skilled trades in residential buildings such as brick layers, carpenters, and plasterers are ones that are affected by shortages and at the moment, even though there's been a bit of a slowdown in new home building over the last three or four years. There are still shortages in certain geographic markets when it comes to providing the labour that's required on that side of things.

The environment is obviously very much an issue at the moment. The bush fire emergency that impacted parts of Eastern Australia before Christmas and in the early weeks of the New Year has physically destroyed infrastructure in certain parts of the country.

In terms of environmental regulations, the updated National Construction Code took effect across Australia on the 1st of May of last year. That included big improvements in the required energy efficiency performance of commercial building right across Australia. There's a new code being prepared at the moment, which will take effect in 2022, and we expect that's likely to involve increased stringency when it comes to energy efficiency.

As a result of the extreme climate events that we have seen here in the last couple of months, what the country demands is changing compared to where it had been in the past.

I must say that's a very important part of rekindling confidence within the economy, and winning the battles for people's hearts and in some ways trying to give people the confidence and the security that the economic conditions here in 12 months-time will be better than what they are in now.